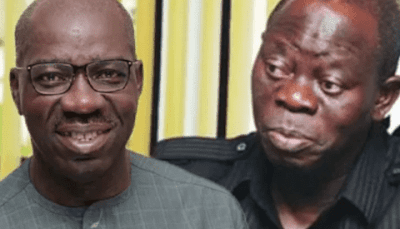 This position was made known by the ex-militants under the aegis of Niger Delta Ex – Agitators Forum.

In a statement by their spokesman, Godstime Ogidigba and leader, Peter Kabiru, and made available to newsmen on Thursday, they noted that they have “watched patiently” for over three years and saw how Obaseki has consistently displayed that Ijaw communities are not part of the State.

According to the statement, “Obaseki got 90 percent votes from the Ijaw ward in Ovia Southwest Local Government Area of Edo and the ward secured the highest votes in the state in the 2016 elections.


“After all our efforts, we have nothing to show for this support. There is nothing on the ground in any Ijaw community to show that we are part of this state. Obaseki should make public any significant developmental project he has sited in any part of the Ijaw communities.

“We urge Ijaw people to boycott the APC primaries and the governorship elections on September 19 by rejecting the electoral materials that will be provided by INEC. Obaseki does not see Ijaw as part of Edo State.”