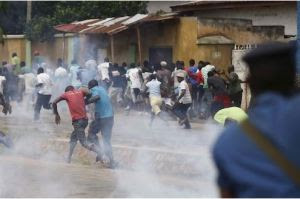 Following the gradual easing of the lockdown imposed on the FCT, Lagos, and Ogun states, members of the Islamic Movement in Nigeria, IMN, also known as Shi’ites, on Tuesday, vowed to resume protests in demand for the release of their detained leader, Sheikh Ibraheem El-Zakzaky, and his wife, Zeenat.

In a statement signed and issued in Abuja by Abdullahi Musa, the Secretary of IMN’s Academic Forum, the Muslim sect maintained that they are involved in an ideological pursuit which, according to them, cannot be derailed by the security forces.

While accusing the Federal Government of seeking to eliminate El-Zakzaky, the Shi’ites said they would certain individuals operating within the corridors of power responsible should anything untoward happen to him at a Kaduna correctional facility.

The statement reads in part, “The phantom claim that IMN is armed is completely ludicrous; weapons are for the foolhardy. Ours is a conceptual struggle that gun never makes nor mars, and it cannot be put off with a gun; gun can only make it stronger.


“An ideological movement of more than forty years standing without a record of violence is indeed a movement that improves lives and makes them better. If it ameliorates, it cannot turn out to be that which aggravates or destroys.

“It is high time the regime aligned with substance and stop chasing a shadow. Incessant killings merely make us resistant to deterrence.

“Over 40 years now, Sheikh Zakzaky and his followers have been detained and still are being detained, but we always follow the lawful approach in securing the release of our brothers and sisters.

“On the current illegal detention, the Sheikh has employed the services of Barrister Femi Falana, SAN to pursue the case at Kaduna State High Court and Court of Appeal, Abuja.

“From December 2015 to date security agents have arrested thousands of Sheikh Zakzaky’s followers.

“We employed the services of lawyers in both Kaduna and Abuja. In the two above-mentioned cities alone, more than 1,000 brothers and sisters have been acquitted and discharged by different courts.

“Is it not criminal for a state to weaponize its detention of a citizen and be aiming at his life? How on earth would someone think it feasible for a cabal in the power corridor to kill a man it has so much oppressed and got off scot-free?

“This is, of course, too expensive a joke to crack. We are in the know of all those accomplices involved, and they alone will squarely be held responsible for whatever happens to our leader.

“Finally, despite deliberate provocations and intimidations, we are determined to continue with our protest demanding for the unconditional release of Sheikh Ibraheem Zakzaky and his wife, Mallama Zeenah.”