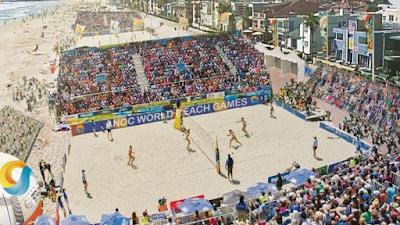 The 2021 World Beach Games have been moved to 2023, the Association Of National Olympic Committees (ANOC) said on Friday.

ANOC said the shift was to enable countries to have time to prepare their athletes for the rescheduled Olympics in 2021.

The Olympic Games, originally scheduled to start in July this year in Tokyo, have been postponed to July 23 to Aug. 8, 2021.

This was due to the COVID-19 pandemic which has infected more than 3.29 million people worldwide and killed nearly 233,000.


ANOC had opened a bidding process to find a host for the Beach Games in January before deciding to move the event to 2023.

This was done so that the National Olympic Committees (NOCs) could also prepare for the Winter Olympics in 2022.

“We have a responsibility to ensure that we continue to listen to our NOCs and deliver an event that is in their best interests,” ANOC’s acting president Robin Mitchell said in a statement.

“With Tokyo 2020 now scheduled for next year and then Beijing 2022 taking place just over six months later, the ANOC Executive Council has decided it would put too much pressure on NOCs to host the World Beach Games between the two Olympic Games.

“Of course, the World Beach Games involves different athletes and different sports from the Olympic Games, but ultimately it is the same NOCs who have to prepare the teams.”

The ANOC said it was also revising the bidding process which will be reopened next year.

The 2019 Doha Beach Games had 36 events in 13 sports, including beach soccer and 4×4 beach volleyball.