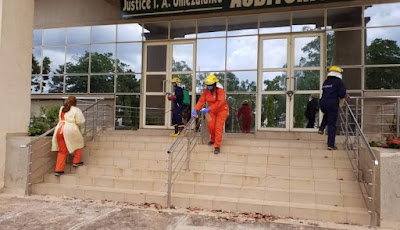 The Enugu State Fire Service, today, commenced the decontamination and fumigation of all court premises and offices in the state, starting from the State Judiciary Headquarters complex at the Independence Layout, Enugu.

Briefing newsmen at the State High Court complex, the State Chief Fire Officer, Engr. Okwudiri Ohaa, said that the ongoing exercise was directed by Governor Ifeanyi Ugwuanyi in furtherance of his administration’s efforts to contain the spread of Coronavirus Disease (COVID-19) in Enugu State.

Engr. Ohaa explained that the first phase of the decontamination will cover the High Courts and Magistrates Courts, while the second phase will be the turn of the Customary Courts.

Noting that the court premises are among the sensitive places that attract influx of people, the Chief Fire Officer recalled that the administration of Gov. Ugwuanyi had recently carried out the decontamination exercise in Enugu metropolis and its environs, all major markets in the state, motor parks, hospitals, among other high traffic areas.


Engr. Ohaa who disclosed that the exercise will be repeated in some of the areas, pointed out that “from here (State High Court complex) we go to filling stations where essential services are also being rendered”.

He added that the exercise will equally be extended to “Nsukka zone and Awgu zone”, stressing that “it is only Enugu State that has been consistent in the decontamination and disinfection of its environs”.

His words: “The records are there; we have covered over 300 high human traffic areas in the state and we are continuing. The substance we are using for the fumigation and decontamination is powerful chlorine disinfectant mixed with calcium hypochlorite. It is internationally recognized and not harmful to health”.

Responding, the Chief Registrar of the State High Court, Mrs. Martha Aroh-Onuoha, on behalf of the Chief Judge, Hon. Justice Priscilla Ngozi Emehelu, thanked Gov. Ugwuanyi for his administration’s sheer commitment to safety, health and wellbeing of the people of the state.

The Chief Registrar said that decontamination exercise coincided with the directive of the Chief Justice of Nigeria, Hon. Justice Ibrahim Tanko Muhammad, “that all courts should be decontaminated”, describing the exercise by the state government as a welcome development.