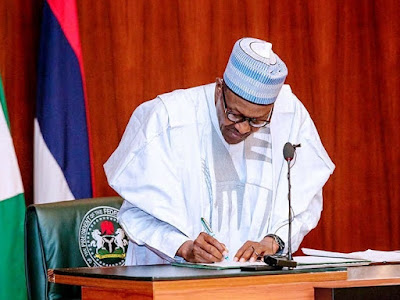 President Muhammadu Buhari has written to the Senate, requesting for the screening and subsequent confirmation of Professor Jumai Audi as the Chairman of the Nigerian Law Reform Commission.

In the letter read Tuesday during plenary by the President of the Senate, Senator Ahmad Lawan, President Buhari is also seeking for the screening and confirmation of Hon. Ebele Bernard Chima as Commissioner representing the  South East; Barr. Bassey Dan Abia as Commissioner to represent the South-South; and Hon. Mohammed Ibraheem as Commissioner for  South-West.

The letter from the President requesting the confirmation of the nominees reads: “In compliance with the provision of section 2(2) of the Nigerian Law Reform Commission Act No. 7 of 199, I wrote to forward to the Senate for confirmation the under-listed (4) names of nominees as Chairman and full-time members of the Nigerian Law Reform Commission.”

Also yesterday, the Senate  received a request from President Muhammadu Buhari for the confirmation of Diana Okonta (South-South); and Ya’ana Talib Yaro (North-East) as Non-Executive Directors of the Nigeria Deposit Insurance Corporation (NDIC).


According to President Buhari, the appointment of the nominees was done “in compliance with the provision of section 5(2)(4) of the Nigeria Deposit Insurance Corporation Act” to fill existing vacancies.

Meanwhile, the Senate gave the letters accelerated hearing as the Senate Standing Orders as Amended was set aside to give room for the quick response following the outbreak of the Coronavirus COVID-19 that is at the moment, ravaging the world.

To allow for the Nominees to be Commited same legislative day contrary to the Standing Orders, the Senate Leader, Senator Yahaya Abdullahi, All Progressives Congress, APC, Kebbi moved moved a motion relying on order 1(b) of the Senate Standing rules for the upper chamber to expedite action on the President’s request for the confirmation of the NDIC nominees.

Order 1(b) reads, “In all cases not provided forhereinafter, or by Sessional or other Orders or practice of the Senate, the Senate shall by Resolution, regulate its procedure.”

The President of the Senate, Senator Ahmad Lawan in his ruling, underscored the need for the upper chamber to “fast-track the process” to enable committees to screen the nominees.

Also the President of the Senate referred the NDIC nominees to the Senator Uba Sani, All Progressives Congress, APC, Kaduna Central led Senate Committee on Banking, Insurance, and Financial Institutions.

The Committees were given to weeks carry out the screening exercise and report back at Plenary.