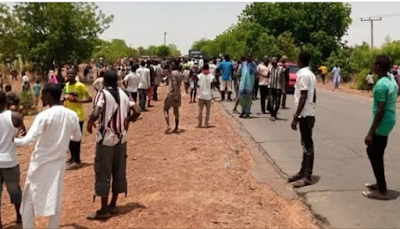 For the second time in one week, COVID-19 patients in Gombe state have hit the streets to demand better welfare.

Recall that some of the patients at the Federal Teaching Hospital, Gombe, and Kwadon Isolation Centre in Yamaltu Deba local government area of the state took to the streets, on Tuesday, alleging poor treatment.

While health officials succeeded in pacifying the patients at the hospital, those at the isolation centre went wild. They mixed with villagers who reportedly protested along with them.

The aggrieved patients blocked a major highway in the state, making it difficult for motorists to move for at least 30 minutes.


Some of them were said to have fled the isolation centre while others returned there at the end of the protest.

A resident, who craved anonymity, disclosed on Friday that the action of the government triggered the fresh protest.

“After the protest of Tuesday, the government was very embarrassed so they paid more attention to those at Kwandon Isolation Centre, neglecting the ones at the hospital,” the resident said.

“They probably felt the officials at the hospital could calm the patients there. But when the ones at the teaching hospital heard that things were better at the other place, they felt government did not care about them because they did not go into the streets.

“So, they also demonstrated today, making the people to panic until security operatives succeeded in dispersing them.”

TheCable also reports that a hospital source revealed that some of the patients had fled to their homes.

This claim could not be independently verified.

Ahmed Gana, commissioner for health, neither responded to calls not text messages as of the time of filing this report.

The presidential task force on COVID-19 had promised to look into the situation at Gombe and some other places were patients complained of poor welfare.

There are currently 109 COVID-19 patients in Gombe.