Bauchi gov: I survived COVID-19 but our people do not believe it’s real 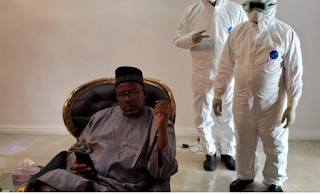 Bala Mohammed, governor of Bauchi, says residents of the state do not believe COVID-19 is real even though he survived the disease.

Mohammed, who said this during an NTA programme on Monday, said the people of the state are refusing to adhere to guidelines to curb the spread of the disease.

Mohammed, who was the index case of the coronavirus in Bauchi, recovered about a month ago.

He described his experience as a godly intervention to prove that the disease is real but lamented that his people are still adamant about it.

“Part of the problem we have in the state is that of denial, intransigence and adamancy (sic) because people don’t believe that this disease is real,” he said.

“And I told them, maybe as a way of godly intervention, I was the index case in the state. COVID-19 is not a respecter of personality and I have been able to come out.

“Therefore, people should take this disease very seriously. We have locked down our mosques and churches and people still want to go for Friday prayers and what have you. And they are going to the market but don’t want to wear masks.”

He also denied recommending the use of chloroquine — which he said was administered to him — in treating the disease.

“I didn’t recommend the use of chloroquine,” he said, adding: “I am not a medical doctor, or a stupid man to start diagnosing something or prescribing medicine that I don’t have capacity to do.”

About 150 people have died in one of the local government areas in the state, though the governor said they were not related to COVID-19.

Bauchi is the sixth most affected state with 182 confirmed cases of the disease.