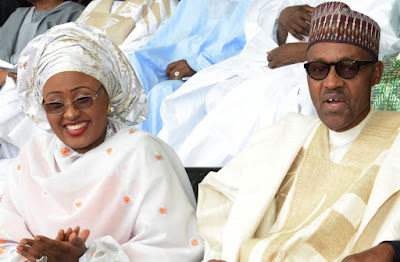 Arewa Youth Consultative Forum (AYCF) has commended Aisha, wife of President Muhammadu Buhari, for being outspoken and telling her husband the bitter truth.

This was contained in a statement Tuesday night by Yerima Shettima, AYCF President.

The group said Aisha has continued to tell her husband the truth, despite the silence of those around him.

Recall that since Buhari assumed power in 2015, the president’s spouse has commented on government and national issues, which affect the masses.

In 2018, Aisha condemned the primary election conducted by the ruling All Progressives Congress (APC) in some states.

In 2019, she questioned the disbursement of over N500bn Social Investment Programmes (SIP) funds by the Nigerian government.

In their reaction, AYCF said: “Throughout the political history of this nation, Nigeria has never had a First Lady who tells the truth in black and white and without fear or favor like her.

“It is undeniable that she tells the truth regardless of whose ox is gored. Apart from telling the bitter truth, even to the President when his aides decide to be silent, she has a reputation for helping people.

“Even her harshest critics would readily admit that when it comes to telling the truth in plain language. To the President, she gives pieces of advice on knotty issues of socio-economic development.”

The group, however, hailed Aisha Buhari for her recent donations to the vulnerable.

“Recently, she put smiles on the face of some poor families in Kano. No one thought help would come to the rescue of those Kano households. Hope was almost lost”, Shettima added.