Agent engaged to recover $62.5bn oil debt not mine – Malami 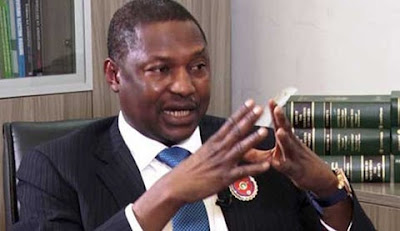 The Attorney General of the Federation and Minister of Justice, Mr. Abubakar Malami (SAN), on Friday, denied owning a firm his office engaged to recover about $62bn debt from some international oil firms.

The debt recovery which was said to have entered into a contract with the AGF office based on huge fees, has been reportedly disengaged by the President Muhammadu Buhari.

Malami, in a statement by his Special Assistant on Media and Public Relations, Dr. Umar Gwandu, on Friday, said the firm had been mischievously portrayed as his in some media reports.

The statement stated that “Malami in his personal capacity does not have personal ‘debt collectors’ for the recovery of federal government debts”.


The statement added, “For the avoidance of doubt, the Office of the Attorney General and Minister of Justice does not engage recovery agents based on projected personal gratification or individual’s inclinations.

“Hence, all those engaged by the Federal Government for undertaking certain tasks in the recovery of assets and generation of revenues belonging to the government did not belong to ‘Malami’ as mischievously portrayed by some certain media outlets but Federal Government of Nigeria through the instrumentality of the office of the Attorney General of the Federation and Minister of Justice.

“Such engagements were purely based on the interest of the general public as a guiding principle.

“The Minister reiterated his stance that engagement of recovery agents was neither propelled by any ulterior motive nor about gratification of any personal desire through any percentage to be given to or by the recovery agent, but of an unflinching patriotic commitment to get back to the country the revenue it deserves.

Agent engaged to recover $62.5bn oil debt not mine – Malami
The $62bn, which five international oil companies are allegedly owing Nigeria followed the 2018 Supreme Court judgment which adjusted the Production Sharing Contracts between Nigeria and the firms.

The firms have since filed suits to challenge the amount quoted by the Federal Government as their accrued debts.