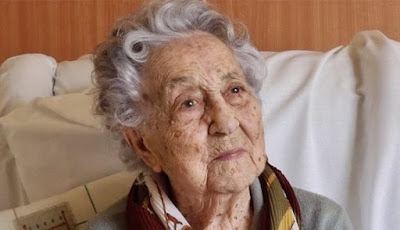 The mother of three who is a resident of the Santa Maria del Tura care home in the city of Olot in the eastern Spanish province of Girona in the Catalonia region is reported to have survived CIVID-19.

Branyas tested positive to coronavirus in April and was isolated in her room in the care home as she fought the disease before finally testing negative.

Branyas who was born in San Fransisco in the United States on March 4, 1907 is no doubt a survivor as she has survived quite a number of tragedies that have killed many.


She lived through the Spanish flu pandemic that swept the world in 1918 and 1919, killing an estimated 50 million people.

Considered the oldest person in Spain by the Gerontology Research Group, a global group of researchers in various fields which verifies and tracks supercentenarians – people who have reached the age of 110.

There have been other reported cases of people over the age of 100 to have survived the coronavirus but Branyas is the only confirmed supercentenarian to have done so.

Other people over the age of 100 to have survived the disease include a 107-year-old Dutch Woman, Cornelia Ras, who lives in a nursing home in which twelve people died, and a 104-year-old American, Bill Lapschies.

Zhang Guangfen, a 103-year-old woman from Wuhan where the virus is said to have originated from, is also a survivor.

Anyone over the age of 70 is considered to be at particular risk from the coronavirus, as is anyone with any underlying health conditions, making Branyas’ recovery even more remarkable.

Branyas says ‘having good health’ is the key for a long life, adding that she never smoked but only ever went for walks with friends as a form of sport.

She married doctor Joan Moret in 1931 and had three children, 11 grandchildren (one of whom is 70 years old) and 13 great-grandchildren.