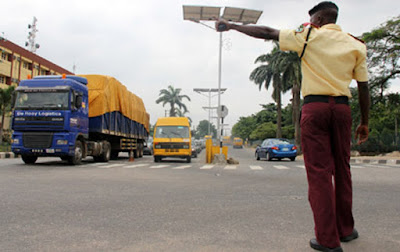 The Lagos State Traffic Management Authority on Thursday read the riot acts to motorists reminding them that they were not exempted from the government’s lockdown order.

The authority advised motorists to comply with the government’s directive and desist defaulting the order.

President Muhammadu Buhari in a broadcast to the nation on Sunday evening, had directed cessation of all movements in Lagos and the FCT for an initial period of 14 days with effect from 11 p.m. on Monday.

Buhari, who noted that this restriction would also apply to Ogun due to its close proximity to Lagos State and the high traffic between the two states, said the step was to stop the spread of the virus.


LASTMA General Manager, Olajide Oduyoye, commenting on the directive on Thursday said the level of compliance in the state by motorists was pretty good.

He, however, advised motorists not to defy the order warning that those caught violating it would regret their actions.

Oduyoye said, “I think the compliance rate by the people to the lockdown order of the government is between 90 percent and 95 percent.

“You may feel you want to take a risk and you think you will get away with it but note that once you are caught, you will regret that action because there is a purpose for everything.

“The government has said to the people: stay-at-home; keep your vehicles at home, there is no need for you to be on the road and be driving to go and visit or for whatever.

“The enforcement agencies including LASTMA, the Federal Road Safety Corps, Police, and others are on the road to ensure compliance by the public.

“When they arrest any motorist who does not have an identity card to the purpose of the journey or the reason for being on the road, such would regret the action.

“The good thing for all is to try not to do anything that  they will regret.”