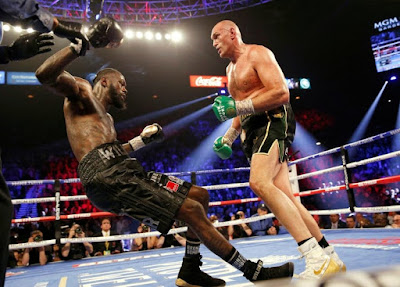 Deontay Wilder’s boxing career is over if he loses his third fight against Tyson Fury, according to WBC president Mauricio Sulaiman.

The Bronze Bomber lost his WBC heavyweight title after suffering the first loss of his career against Fury in Las Vegas on February 22.

Despite being convincingly beaten in seven rounds by the Gypsy King, Wilder insists he will take up his rematch clause and a third fight between the pair was scheduled for the summer before the coronavirus outbreak halted the boxing calendar.

But while Sulaiman believes the delay will benefit Wilder, the WBC president has warned the Bronze Bomber that his career is on the line if he takes a third fight against Fury.


‘I don’t know if July 18 was a real date [for Wilder-Fury III], but it was quite soon for Wilder to go back immediately to camp after being knocked out the way he was knocked out,’ Sulaiman told Black Eye Barber Show.

‘Go back to camp and recover mentally and physically from such a… I mean, to be undefeated, five years world champion and then boom. It’s a very difficult task to recover mentally, plus the physicality.

‘But I think this delay is going to help Wilder, in my opinion.’

Asked how Wilder is coping after his defeat, Sulaiman replied: ‘He’s very well. He’s a warrior, he’s a monster and he’s got  tremendous motivation.

‘You have to understand what a fighter goes through, in life before they go through the glory days. Every fighter is a story for a movie.