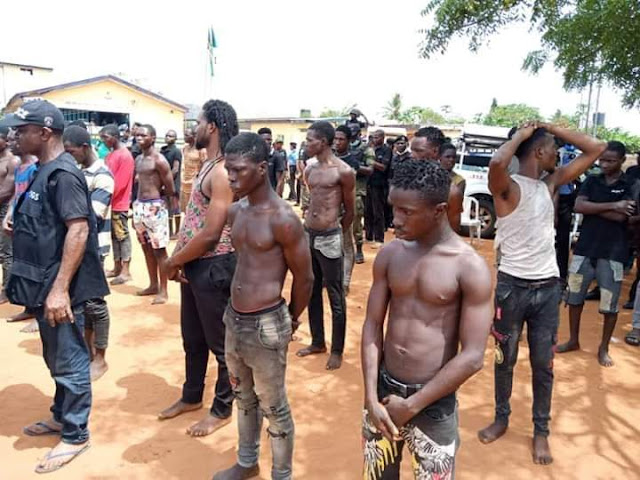 The Nigerian Police Force has said they have arrested 150 suspected robbers and cultists involved in series of robberies in some parts Lagos and Ogun state occasioned by Coronavirus lockdown.

The arrest followed complaints by residents of Owode, Ilepa, Ifo, Arigbajo,Itori, Dalemo, Ijoko Joju,Sango, Ota in Ifo, Agbado- Ijaiye among other communities in Ifo and Ado-Odo/Ota Local Government Areas of the state over the spate of robberies and cult clashes allegedly perpetrated by the suspects.


Ogun State Governor Dapo Abiodun had vowed to ensure that the law deals ruthlessly with any of them found culpable irrespective of the person’s background, threatening to make haste in signing death warrant for any sentenced to death.

The Commissioner of Police, Kenneth Ebrimson, who took reporters round the troubled councils after parading the 150 suspects, refuted the claim that robbers had taken over Ifo and Ado/Odo/Ota areas of Ogun State.

Addressing reporters at the Ifo Divisional Police station, Ebrimson said there was no report of robbery to the command by anyone living in the embattled Councils.

The Commissioner of Police said it was a case of cult clashes among seven rival groups within the areas as a result of the killing of one of them, explaining that the Command responded to the emergency by deploying men from Special Anti-Robbery Squad; Anti-Cultism unit, Anti-Kidnapping unit; Special forces and conventional policemen who were drawn from the Area Commands in Ifo and Ota respectively.

Ebrimson explained that his men smoked the suspected criminals out of their hideouts and recovered various weapons .

He said: “The Genesis of this was from some criminal gangs that engaged in supremacy battle in Ifo and spread to Ado-Odo/Ota Local Government Area of the state.

“It started on April 4, and the command tactical operation arrested some hoodlums and ammunition.

“I want to say that there was no single case of armed robbery, no case of kidnapping has been reported. Nobody has been killed.

“The basic issue is cultism that emanated from the killing of one of them in Ifo and spread to Sango, Ijoko and Agbado.”