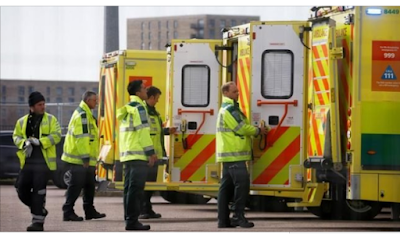 The number of people who have died from complications of COVID-19 in the UK increased by 938 in 24 hours.

This makes the latest figure the biggest daily increase since the outbreak of the disease in the country.

According to the country’s department of health, a total of 60,733 people have now tested positive for the virus and 7,097 of those hospitalised have died.

The National Health Service (NHS) said the patients who have died from the disease were aged between 22 and 103-years-old.

It added that all but 46 of the deceased had underlying health conditions.

Prime Minister Boris Johnson who had tested positive for the disease was hospitalised on Sunday. He was later taken to intensive care unit over worsening symptoms.

Chancellor Rishi Sunak, said the prime minister is receiving “excellent care” and remains in intensive care, where his condition is “improving”.

The government also said the measures taken to contain coronavirus are set to be reviewed soon.