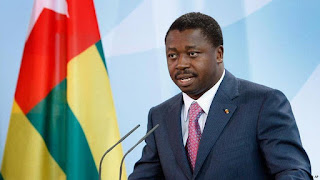 President Faure Gnassingbe of Togo has declared a three-month “state of emergency” and curfew aimed at stopping the spread of coronavirus.

The tiny West African nation of eight million has so far recorded 36 confirmed infections and two deaths from the disease.

Gnassingbe said in a televised address late Wednesday that the unprecedented move was “proof of the gravity of the situation that we face”.

He said a curfew would be in place for an indefinite period from Thursday between 7 pm and 6 am.


A 5,000-strong unit of security agents was being set up to tackle the pandemic and a fund worth $650 million (600 million euros) was aimed at cushioning the economy from the impact of the crisis, the president said.

Gnassingbe’s family has ruled Togo for over five decades.

The current leader took over after the death of his strongman father in 2005.

Gnassingbe, 53, claimed a fourth-term at an election in February that the opposition claimed saw widespread vote-rigging.