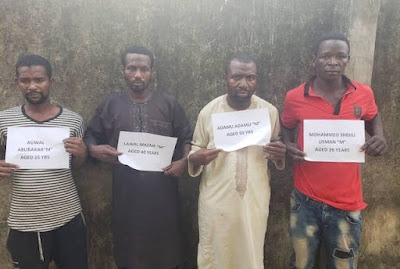 The Nigerian Police have unveiled the faces of four suspects said to be Funke Olakunrin’s killers.

Olakunrin, daughter of Pa Reuben Fasoranti, was killed on 12 July 2019, at Kajola on Ondo-Ore Road by gunmen suspected to be Fulani marauders.

After some painstaking investigation, IGP Mohammed Adamu announced the arrest of the suspects on Thursday.

They are: Lawal Mazaje,40, from Felele, Kogi and Adamu adamu, 50, from Jada in Adamawa.


The others are Mohammed Shehu Usman, 26, from Illela Sokoto and Auwal Abubakar, 25, from Shinkafi, Zamfara state.

However, the IGP also announced that four other suspects, including the ringleader named Tambaya, are at large.

The Police have declared wanted and have given out some description.

According to the police, Tambaya speaks Hausa, Fulfulde and Pidgin English.

“He has visible scar from stitches on his forehead down to his nose and mouth”.