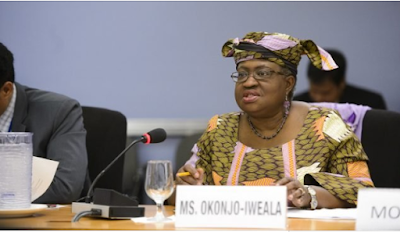 In a post on Wednesday, Ngozi underscored a point about observing social distancing in food aid distribution in the COVID-19 era.

She cited a purported example from Rwanda and attached a photo to underscore her point.

“Responsible food distribution with social distancing to assist lower income households in the #COVID19 era! A great example from #Rwanda where community workers also distribute food and other necessities door-to-door @PaulKagame”, she tweeted.

But as it turned out, the photo was not on point.

The reference to Rwanda was also false.

The event and photo she cited happened in The Gambia in 2019 during the Ramadan.

” But unfortunately, the picture attached to your tweet is fake, didn’t happen in Rwanda, but Gambia, it happened in May, last year, during Ramadan”, wrote Bashir Ahmad, President Muhammadu Buhari’s aide.

Good afternoon Ma’am @NOIweala, it is very true that Rwanda, Nigeria and other African countries are really trying. But unfortunately, the picture attached to your tweet is fake, didn’t happen in Rwanda, but Gambia, it happened in May, last year, during Ramadan. #StaySafe! 🙏🏼 https://t.co/lXFSIhx3eE pic.twitter.com/nOhJm5phgn
— Bashir Ahmad (@BashirAhmaad) April 8, 2020

Caught out and with eggs plastered on her face, Ngozi later apologised.

She blamed a friend for making her commit the error.

“Thanks to those who have drawn my attention to the food distribution picture I tweeted earlier today. A friend sent it to me that it’s from Rwanda. Whether Gambia or Rwanda, the point I want us to focus on is that it is a safe way of handling food distribution”, she wrote.

This happened in February this year..

Then, Zulum gave out cash and food to Nigerian refugees in Rann.