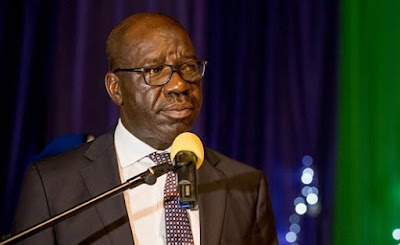 The Edo State Governor, Mr. Godwin Obaseki, has approved the appointment of Osaze Ethan Uzamere as his Chief of Staff.

Uzamere is the son of Senator Ehigie Uzamere, who represented Edo South Senatorial District in the National Assembly between 2007 and 2011.

An investment banker, Uzamere, 38, is a graduate of Stony Brook University, New York, where he majored in Computer and Electrical Engineering.


He has had stints with Lehman Brothers and South Grade Engineering, among others.

A thorough-bred professional, he had, before his appointment, served as Executive Assistant to Governor Obaseki.

The former Chief of Staff, Taiwo Akerele, has in a short statement revealed that the main reason he resigned was due to what her called “administrative reasons.”

“My decision to exit the government is based on administrative and governance grounds.

“I am solid with His Excellency, Mr Godwin Obaseki, in his quest to transform Edo State. His mission and vision resonate with mine.

“This is all I have to say, I will like to be given the opportunity to go private, as I part ways administratively with the government, based on principles.

“I thank His Excellency for the opportunity given to me to serve in this capacity and also thanks to His Royal Majesty, Oba of Benin, Oba Ewuare II, for his immense leadership and support during the period I served in this capacity. May his reign be long and peaceful. Amen”