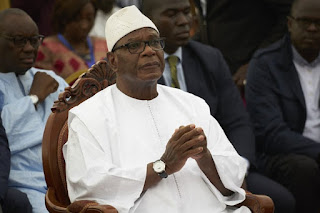 Malian President, Ibrahim Boubacar Keita, has said the second round of a parliamentary election scheduled for April 19 will go ahead despite the need for social distancing.

He also announced a coronavirus aid package for poor people and hard-hit firms, as cases continue to rise in the war-torn West African state.

The president warned on Friday that the country’s already war-battered economy was facing a shock, and declared a package worth some 500 billion CFA francs ($832 million).

“The government of Mali… is willing to make the greatest sacrifice to lessen the negative impact of the pandemic on our economy and society,” Keita said in a televised address.


Mali is one of the poorest countries in the world and has been struggling since 2012 to quell a jihadist insurgency that has killed thousands of soldiers and civilians.

The conflict – which has left swathes of the country outside state control – has aggravated fears that Mali is ill-prepared to tackle a large coronavirus outbreak.

Authorities have recorded 87 cases in the country so far, with seven fatalities. The government had previously declared a nationwide night-time curfew and closed land borders.

Warning of the steep economic costs associated with the pandemic, Keita said Friday that the government would shoulder water and electricity bills for the poorest people in April and May, among other measures.

The government would also distribute 56,000 tonnes of grain in food aid and 16,000 tonnes of animal feed, he added, and allow tax rebates for firms hit hard by the virus.

The president added that the government is also considering isolating the capital Bamako, where most of the country’s infections have been detected, with a decision due soon.