Kaduna state governor, Mallam Nasir El-Rufai’s son, Bello El-Rufai is being dragged on Twitter after he allegedly passed a lewd comment to another user on the platform.

According to the Twitter user identified as @oewonah, while responding to a comment he made on Bello being Daddy’s boy, the governor’s son hit his DM and threatened to pass his mother to his friends so they could sleep with her. 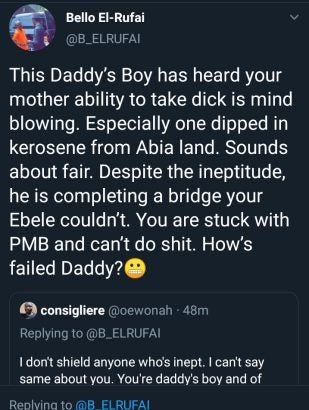 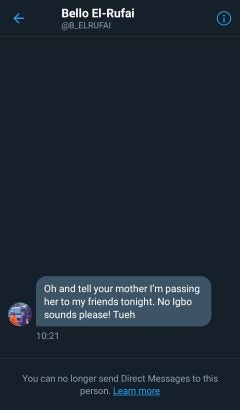 He also allegedly wrote that @oewonah’s mother’s ability to take in d**ick is mind blowing, before blocking him on the platform.

His mother’s, Hadiza El-Rufai’s attention was however called to the vulgar tweet, but she rather chose to be on the side of her son, stating that all is fair in war in love and war and the user deserved what dose her son served him.

This was what El Rufai's son sent before blocking me.
I'm not even Igbo and none of what he said got to me. He can't call Buhari out for his ineptitude yet he's calling trump names?
Did he vote Trump?@ayabie_ikem @MobilePunch @Alaye_100 @HAHayatu @AishaYesufu pic.twitter.com/jLsfCsw0Cz
— consigliere (@thanos_zer) April 12, 2020