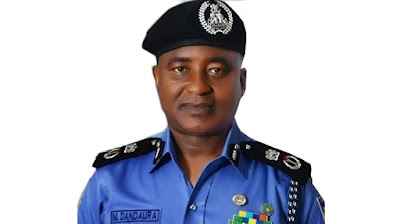 The Inspector-General of Police, Mohammed Adamu, has removed the Rivers State Commissioner of Police, Mustapha Dandaura.

Dandaura, who is now the Provost, Force headquarters, Abuja, was believed to have been redeployed over the arrest of two Caverton Helicopters pilots and their passengers on April 7.

He was replaced with CP Joseph Mukan.

Also redeployed was CP Musa Adze, who is now in charge of the Anti-Fraud Unit, a statement in Abuja on Friday by the Force spokesman, DCP Frank Mba, said.


The redeployments are with immediate effect.

The CP had followed the governor to the NAF base in Port Harcourt to arrest the pilots who were hastily arraigned before a magistrate’s court and quarantined in a hotel on the orders of the court.

Dandaura justified his action, stating that the pilots and the oil workers violated the regulations regarding the safety of the state.

Meanwhile, Wike, on Friday announced the arrest of 22 workers of ExxonMobil who allegedly entered the state in violation of the State Executive Order.

Wike, who spoke during a live broadcast in Port Harcourt, disclosed that ExxonMobil workers were apprehended on Thursday by security personnel along the Ogoni-Akwa Ibom axis of Rivers State.

The governor also maintained that the same law that was applied during the arrest of Caverton Helicopter pilots and 10 passengers would also be applied in the case of the arrested ExxonMobil employees.

He said, “Security agencies arrested 22 staff of ExxonMobil who came into the state from neighbouring Akwa Ibom State in violation of the extant Executive Order restricting movement into the state. We do not know the coronavirus status of these individuals.

“Even though security agencies advised that they be allowed to go back to Akwa Ibom State, I insisted that the law must take its course. This is because nobody is above the law.

“As a responsive government, we have quarantined them in line with the relevant health protocols and they will be charged to court. The same law that was applied in the case of Caverton will also apply to ExxonMobil,” Wike stressed.

He expressed regret that the Federal Government was working “dangerously” to compromise the health protection system of the state and make it (Rivers) vulnerable to coronavirus.

However, a group, the Rivers State Leadership Advancement Foundation, has criticised Wike for arresting the ExxonMobil workers.

RIVLEAF, in a statement issued in Port Harcourt on Friday by its Director of Communications, Onyeche Peters, said the arrest of the ExxonMobil workers appeared as if the governor was against the oil and gas industry.

Peters described the governor’s action as unnecessary and capable of having a backlash on the country.

He said, “It looks as though Governor Wike is targeting the oil and gas industry with the latest arrest of ExxonMobil workers. This is unnecessary and capable of having an international backlash on Nigeria.

“The governor himself during his state broadcast exempted oil workers from the lockdown, so one would have expected the governor to meet with the oil majors and fashion out mutual ways of ensuring compliance with the state’s directive.

“While the governor reserves the right to protect the state, he should do so in cooperation with the various agencies of the Federal Government and corporate bodies, rather than threatening them all the time.”