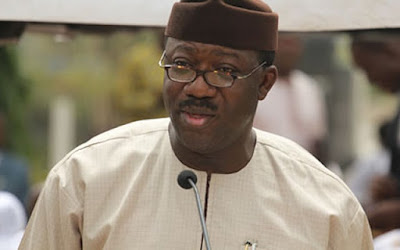 Sources said Durodola, one of the aides in charge of COVID-19, was heard trivialising COVID-19 in a video that went viral about a man who denied his son access to the house after the latter returned to Ekiti State from Lagos.

A statement by the Commissioner for Information, Muyiwa Olumilua, in Ado Ekiti, confirmed that an unnamed security man attached to the Fajuyi Pavilion where the matters of lockdown violators were being handled had been suspended.

Olumilua stated, “The actions or statements of the security man that recorded the video which has gone viral does not reflect the capacity or preparedness of the state task force to combat the COVID-19 virus. He has since been suspended pending further investigations for acting outside the jurisdiction of his scope of authority.


“The security man who recorded the encounter is neither a health worker, nor qualified or authorised to determine the health status of the young man. So, none of his actions or misstatements reflect the capacity or preparedness of the state task force to combat the COVID-19 virus.

“We also consider it necessary to inform members of the public that the video was recorded about four days ago….”

Olumilua lauded the father, Mr Femi Adeoye, for refusing to cover up his son’s travel history and for denying him access into the house without confirming his COVID-19 status.

He said, “Adeoye epitomizes the Ekiti ethos of selflessness, which places greater premium on the collective good of the society above personal and emotional considerations. This is the core of the value orientation policy of the Dr Kayode Fayemi administration”.

Olumilua, in the statement, said, “The attention of the Ekiti State COVID-19 task force has been drawn to a video clip in circulation where a man refused to allow his son, who just returned from a trip outside the state into his house until he had been isolated for 14 days as stipulated by the Nigerian Centre for Disease Control protocol to prevent community spread of COVID-19 in Ekiti State.

“We implore members of the public to emulate the patriotic zeal of Mr Adeoye, and promptly report to the Ekiti State COVID-19 task force any out of-state traveler who sneaks into their neighbourhood, or places of abode. This is to safeguard against the likely health hazard that such returnees portend for the larger society.”