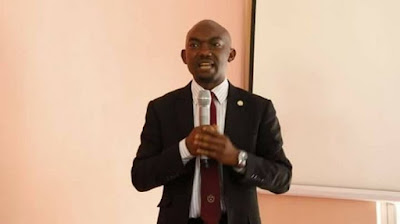 No fewer than 25 operatives of the State Security Services (SSS) on Sunday evening invaded the private residence of former Chief of Staff to Governor Godwin Obaseki of Edo State, Chief Taiwo Akerele.

The development is an indication that things might have fallen apart between the Governor and his erstwhile closest staff.

Akerele resigned his position as Chief of Staff on Friday night and was replaced with Ethan Uzamere, Saturday night by Obaseki.

The operatives were said to have arrived the residence located off 1st Ugbor Road, GRA, in Benin, at about 5 pm in an 18-seater bus and three operational vehicles of Operation Wabaizigan.


It was gathered that a security detail to the Governor had earlier called the Personal Assistant to the former CoS, Jasper Olowojoba to come and remove Akerele’s personal belongings from his former office.

Olowojoba, who was said to have replied that he would remove the items on Monday, was however prevailed upon to come immediately.

Security men attached to the office were said to have allowed him to remove all the belongings, after which they followed him home.

Thereafter, Olowojoba was arrested after using him to search Akerele’s house.

An unnamed source closed to the former Chief of Staff, allegedly told journalists that the whereabouts of Akerele who received visitors in his house earlier in the day, remained unknown.

“They called his PA severally that he should come and collect Akerele’s personal belongings so that the new Chief of Staff could resume, but Olowojoba said he would come for them on Monday but they insisted he must come immediately.

“When he went, they allowed him to remove all his belongings and when they were going with the last consignment, SSS (operatives) went with him to Akerele’s house. They ransacked his house and then went away with his PA, but Akerele’s whereabouts is unknown,” the source said.

As at the time of filing this report, neither Akerele nor his personal assistant could be reached for confirmation, as their mobile phones were switched off.