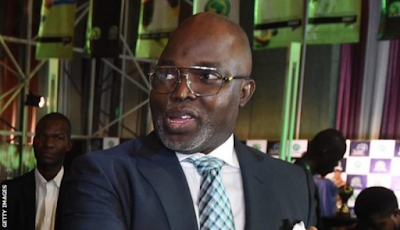 With clubs currently speaking with players and agents to accept a pay cut, and the shutdown of various football competitions around the world, Coronavirus has left a sour taste in the mouth of football faithful.

These were the thoughts of the President of the Nigeria Football Federation, Amaju Pinnick.

Speaking in a monitored interview in Lagos, Pinnick lamented that a lot of money have gone down the drain, because no football activities have taken place in the last two months to generate income.

He pointed at the English Premier League, Spanish La Liga and German Bundesliga as some examples.

“The German Bundesliga is engaging their TV right holders and negotiating with them. Bieng Sports and Canal, the two TV right owners of the French Ligue 1, they are meant to pay 200 million Euros but they cannot pay because there is no content. It is a major minus to World football.” Pinnick said.

Speaking on how Coronavirus have affected football activities in Nigeria, the NFF boss revealed “We ought to have started our Aiteo/NFF Cup. We don’t know if this can happen again, even if an abridged version.

“We were planning for our highly revered NFF/Aiteo award, where the FIFA President was scheduled to attend, because we wanted to celebrate our girls that got to the quarter finals of the 1999 FIFA World Cup. We don’t know if it will hold again, and even if it holds, it will not be very loud.”

Amaju Pinnick however said that this is a time for reflection, and everyone all over the world should make good use of it.

The President spoke on how Nigerian players are faring period. According to him, many of them intend to come back to Nigeria.

“We are in touch with all our players, I spoke with the Super Eagles captain, and the players also have a network where they speak to themselves.

The players even intend to come back to Nigeria; it’s just that they are trying to get clearance.

Onazi called me to inform me that his club gave him a jet, and he was asking how he could get a landing permit. Kalu called to tell me that he is in Lagos and he is happy with reactions he is seeing from government.