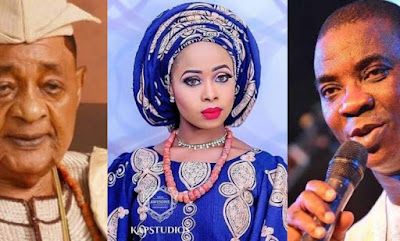 Olori Badirat Ajoke, wife of the Alaafin, Oba Lamidi Adeyemi, has reacted to the rumours of an extra-marital affair with Fuji musician, Wasiu Ayinde Marshal.

A report had surfaced that she was sent packing from the palace after an affair with KWAM 1 was discovered by the monarch Oba Lamidi Adeyemi.


The news came just months after her husband installed KWAM 1 as the Mayegun of Yorubaland.

In a phone conversation, Badirat Ajoke emphatically denied the story.

And she swore by all the Yoruba gods and the orishas of the Alaafin’s palace.

She asked the gods to punish her if she ever had any affair with Wasiu.

She said the rumour mongers, which include Instablog and Chirp Television, had published all manners of falsehood about her in the past.

Watch her interview in Yoruba:

According to our source, Queen Ajoke has indeed left the palace on her own volition and it was over a totally different issue.

Also, Fuji Icon, Wasiu Ayinde prominently called KWAM 1 has responded to the rumours that he’s having an extramarital affair with the youngest Queen of Alaafin of Oyo, Queen Badirat.

Sarcastically reacting to the claims via a music video on his Instagram page, he stated that many haters have been rooting for his downfall and working towards tarnishing his image since he became the Mayegun.


One of his sons, Femi has threatened Chirp Television, one of the sources of the rumour with libel.

Make sure your source is not dead, while at that be sure to have alot of money https://t.co/tokzOhQ51f
— Femi Ayinde Marshal (@FemiMarshall) April 15, 2020