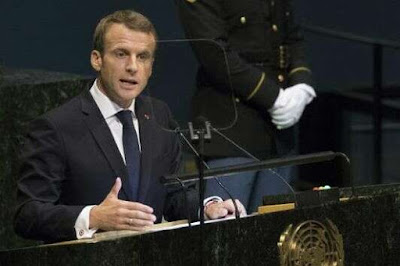 French President Emmanuel Macron warned Tuesday that France was “just at the beginning” of the coronavirus outbreak that has killed 30 people in the country and infected more than 1,600.

“We’re just at the beginning of this epidemic,” he said after a visit to the ambulance service in Paris, urging the French not to panic and saying the authorities were “organised” in the face of the crisis.

France is the second-worst affected country in Europe after Italy.

Culture Minister Franck Riester and five MPs are among those who have tested positive for the virus.


Preventive measures have been stepped up at the presidential palace, with Macron’s cabinet chief ordered to work from home after having been in contact with an infected person.

But with only a fraction of the 463 deaths reported in Italy, France has so far refrained from the draconian measures imposed by its neighbour, which is under nationwide lockdown.

Clusters of cases have been identified in half a dozen French regions, with schools closed in three — the northern Oise area, the northeastern Haut-Rhin area and the city of Ajaccio on the Mediterranean island of Corsica.

Gatherings of more than 1,000 people have been cancelled since the weekend, leading to several sporting events and concerts being called off.

Macron said the government, which is pressing ahead with nationwide municipal elections scheduled on Sunday, was taking a region-by-region approach to the outbreak.

“One must not expect that at a given moment, at a given hour in the country, there will be a big shift when everything changes,” he said, adding the government would continue to adopt a “proportional” response to the epidemic.

Riester, who is in self-confinement at home a day after being diagnosed with the virus, wrote in a Facebook post Tuesday he was “doing well”.

Health Minister Olivier Veran meanwhile attempted to convince the French to turn out and vote for mayors and councillors on Sunday.

A visit to the polling station is “no more dangerous” than a trip to the supermarket, he argued.