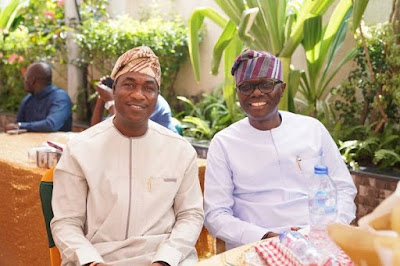 Babajide Sanwo-Olu, Lagos state governor, on Sunday, performed a “leg shake” with Obafemi Hamzat, his deputy, during their visit to the new isolation facility built to contain the deadly coronavirus.

More than 83,774 people have been infected; 2,867 have so far died from the coronavirus, with Nigeria having reported its first case of the ailment after an Italian citizen tested positive in Lagos.

The patient was immediately quarantined at the Infectious Disease Hospital in Yaba. It was reported that he had attempted to escape after complaining of excessive heat and mosquitoes, in a development that stirred up a wave of criticism as regards healthcare standards.

On Saturday, Akin Abayomi, the Lagos commissioner of health, disclosed that the Italian had been moved to a renovated facility, prompting the governor’s trip thereto for inspection.


Among those with whom the governor went for the inspection are Hamzat, the commissioner for health and other members of his entourage.

In a video shared on Twitter by Jubril Gawat, senior special assistant on new media to the governor, Sanwo-Olu is seen performing the “leg shake”, a practice that has become customary since citizens have been advised to restrict touches.


UPDATE: The Incident Commander, The Governor of Lagos State, Mr @jidesanwoolu just arrived ... He is here to see for himself and show Lagosians and Nigerians that we are indeed ready and we have started ... @ProfAkinAbayomi @LSMOH @thetundeajayi @gboyegaakosile @NCDCgov pic.twitter.com/kax8ba7aTq
— Jubril A. Gawat (@Mr_JAGs) March 1, 2020

Speaking at the facility after sessions of handwashing and inspection, Sanwo-Olu said: “A few people have given very wrong information as to what this place looks like.

“It’s a well put together infrastructure as against what has been wrongly reported and sent out on social media and even some print media.

“Even from the external component of the facility, we can see that it’s ready for eventualities and all of the things that we’re talking about.”