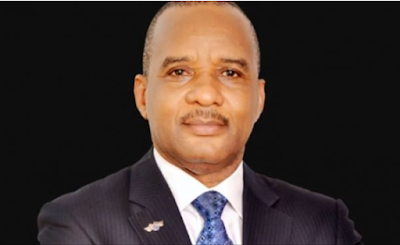 March 10, 2020, marked Dakuku Peterside’s last day in office as the director-general of the Nigerian Maritime Administration and Safety Agency (NIMASA).

Bashir Jamoh succeeded Peterside who has occupied the office for four years since his appointment in 2016.

Jamoh is expected to spend four years in office as NIMASA DG.

NIMASA was created on August 1, 2006, when the National Maritime Authority was merged with the Joint Maritime Labour Industrial Council.

The agency is responsible for the development, protection and manpower training in the shipping industry. It also monitors marine pollution and spillage in Nigerian waters.

Tweets shared on the agency’s Twitter handle showed that a valedictory programme was held for Peterside on Tuesday.

Here is a  glimpse into Jamoh’s life up till the moment his appointment as NIMASA DG was approved.

Jamoh can be described as an accountant because to some extent, he practised as one.

He holds a diploma in accounting from the Institute of Administration at the Ahmadu Bello University, Zaria. He bagged this degree in 1986.

REACHED MANAGEMENT LEVEL SINCE 2003
Jamoh joined NIMASA in 2003 as an assistant chief commercial officer for the eastern and central zones; a management level position.

RISEN THROUGH THE RANKS
In total, Jamoh has spent 17 years out of his 56 years on earth working at NIMASA.

During this 17-year period, he has occupied seven positions within the agency.

Perhaps as a mark of his versatility, he belongs to 15 professional bodies ranging from management, logistics and transport, transport administration and maritime economics to mention a few.

He is also the current president of the Chartered Institute of Transport Administration of Nigeria (CIoTA).

BUHARI’S FATHER
Jamoh was probably guided by intuition to name his Buhari. Not knowing that he would be appointed to a place of authority by his son’s namesake.