I s3xually molested three-year-old girl under a spell – Suspect 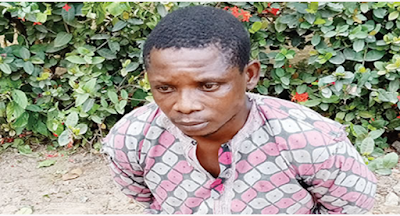 Olusesan Adeyele, a 29-year-old man who was arrested for s3xually molesting a three-year-old girl in Ifetedo, Osun State, said on Thursday that he acted under a spell and pleaded for mercy.

Speaking to newsmen after he was paraded by the state Commissioner of Police, Johnson Kokumo, in Osogbo, the suspect said his head became clear after he had committed the crime.

Adeyele, a printer, said despite the victim’s wailing, he could not stop, adding that he was a first time offender and pleaded for mercy.

Kokumo said the complainant, a woman friend of the suspect, left her daughter in the care of Adeyele sometime in February 2020, adding that on coming back from the farm, she discovered that the girl had been defiled.


The CP stated, “When the mother returned from the farm, she noticed that the victim was bleeding. Upon the receipt of the complaint, the police swung into action and arrested the suspect, who confessed to the crime during the course of investigation.

“The victim was taken to hospital for medical examination and treatment, where she is still receiving treatment and the medical examination revealed that there was extensive laceration into the rectum. The suspect will be charged after the completion of investigation.”