I cried but then moved on, says woman who found she had no female organ at 17 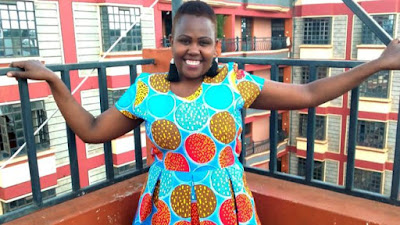 When Julian Peter from Kenya visited the hospital after experiencing swollen legs some years ago, she had no knowledge what her discovery would be.

Then a 17-year-old student, the doctor had simply asked her when last she saw her period — a question which led to series of shocking revelations about Julian.

After series of diagnosis, it was revealed that Julian had Mayer-Rokitansky-Küster-Hauser syndrome (MRKH), a female disorder that affects the reproductive system.

Women who have MRKH usually do not have menstrual periods due to the absence of uterus.


“I discovered I had the syndrome when I was a 17-year-old school student,” she told BBC.

“I don’t have a uterus, so I’ve never had periods. This is the normal that I know, I don’t feel bad about it. People have different feelings about who I am.”

Being a young lady with many dreams, the news left her unsettled for a while.

“I cried on the first day and the second day and the third, but then I moved on. I was only 17 and quite small, so my priority was to get back to school,” she said.

“I was in hospital with my mother, my only parent, and the diagnosis shocked her. I think as a parent there were questions she was bound to ask herself. Essentially she was wondering if she had done something wrong.”

The rare condition had subjected her to series of emotional trauma from members of the society as well as her suitors, who often find it difficult to believe her side of the story.

Ten years after her discovery, she had gone for a successful operation.

“The type of MRKH that I had meant that I had no v@gina, no womb and I only have one kidney. My v@ginal canal was not there and it had to be created,” she said.

Now 29, Julian, has however, made up her mind to use her own story to create awareness about the syndrome and fight the stigma associated with women having it.

“They can say whatever they want to but what really matters is how I take it. If I were to listen to them it would start affecting me, and I would start thinking that what they were saying was true,” she said.

“It took me at least 10 years to decide to share my story with the public. There are people who do not understand what MRKH is and I want to raise awareness.”