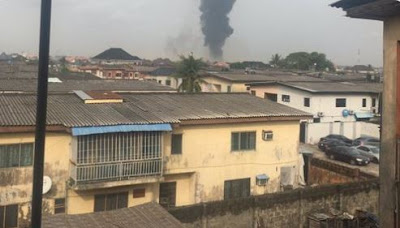 Many residents are beginning to count their loses over the pipeline explosion that occurred on Sunday morning at Ashoba (near Abule Odo) in Amuwo Amuwo Odofin Local Government Area of Lagos.

It was learnt that many buildings have collapsed due to the intensity of the blast. According to eyewitness reports, the shock waves from the explosion were felt as far as 15 kilometers away from Abule Ado.

Information reaching newsmen confirms atlas-cove has suspended supply of product towards that axis as at 9 am Sunday (this) morning.


Meanwhile, several houses close to the explosion area were either totally collapsed or have their roofs blown up. Window panes of some houses were also shattered to pieces.

Worship session of several churches around the area was also brought to an abrupt end as buildings housing the churches are completely shattered.

The operatives of the state fire service and other sister rescue agencies are heading towards scene of the explosion as at the time of filing this report.

However, aside the destruction of properties, number of casualties was unknown as at the time the report of filing this report.

It was gathered that this is the latest in a series of pipeline explosions that have rocked suburbs in the nation’s former capital city.