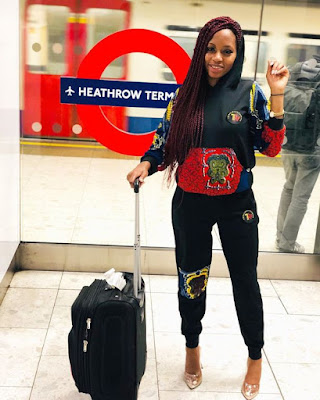 Big Brother Naija season four ex-housemate, Khafi Kareem, simply known as Khafi has narrated her encounter with a homeless man who tried to infect her and some people aboard a train in London with the deadly coronavirus.

Sharing the video on her official Instagram page she wrote: “I was on the train and this homeless man threatened to infect us all with coronavirus. Watch to see what happened next… ONLY IN LONDON!!!

Khafi is currently engaged to Gedoni Ekpata whom she met on the Big brother show. They are expected to walk down the aisle later this year.

Gedoni proposed to Khafi on Christmas Day and the later said yes, following in the footsteps of Season Three housemates, Bam Bam and Teddy A.

Khafi posted the good news on Instagram, with a photo of the lovers locked in a bearhug, with Khafi holding a paper sign: “I said Yes”.

Following BBNaija, Khafi pushes through and has hosted major events including The Future Awards and Nigeria Legal awards.