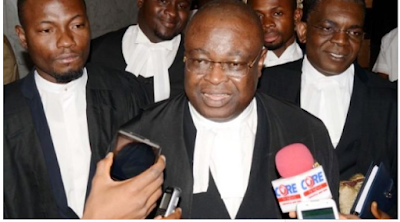 The Economic and Financial Crimes Commission (EFCC) says a group of 27 lawyers are blackmailing Rotimi Jacobs, one of its lead prosecutors, over an alleged £2.5 billion fraud case.

In a statement by Tony Orilade, EFCC acting spokesman, the commission said the lawyers in a petition addressed to the national executive of the Nigerian Bar Association (NBA) alleged that Jacobs was using the anti-graft agency to intimidate them for winning a monetary suit against the Central Bank of Nigeria (CBN) and Union Bank of Nigeria Plc.

It said the lawyers alleged that Union Bank induced the EFCC and Jacobs to file criminal charges against their client, Petro Union Oil, in order to frustrate the execution of the judgment.

But the EFCC countered the allegation, describing it as “false and misleading”.


The commission described Jacobs as a reputable lawyer who has successfully prosecuted several high-profile cases for the agency.

“For the purpose of clarity, the purported £2.5billion is a fictitious fund Petro Union Oil drew against an account in Barclays Bank( United Kingdom) through a cheque issued in 1994,” the EFCC said.

“Besides, the company had also been voluntarily dissolved by its promoters in the United Kingdom. The same promoters are the mastermind of Petro Union oil.

“For some inscrutable reasons, Petro Union Oil was able to procure a court judgment for the £2.5billion against the CBN and Union Bank on the basis of an alleged CBN Statement of Account when it is elementary that the CBN ,like all Central Banks across the world, does not maintain accounts for private entities.

“Based on the foregoing, the EFCC filed a 7-count charge against Petro Union oil and its directors and trial is ongoing at the Federal High Court.”

The EFCC said the blackmailing of Jacobs is a ploy to divert attention from the ongoing trial and frustrate the agency.

“It should be pointed out that, the publication alleging intimidation and harassment by the lawyers is a desperate attempt by the shady elements and their promoters to divert attention from their ongoing trial and frustrate the EFCC in its determination to rid the country of corrupt and manipulative elements , including the lawyers and other professionals who lent their names to aid the fraud, ” it said.

“Mr. Rotimi Jacobs, SAN, is a highly respected member of the legal profession who has worked assiduously in conjunction with the EFCC to secure convictions of many notable convicts in the society.

“The EFCC will not be deterred from its avowed goal and is considering filing a complaint against these desperate lawyers with the appropriate organ of the legal profession.”