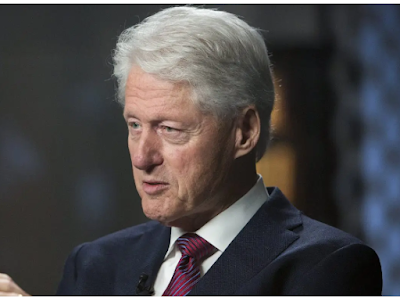 Former President of the United States, Bill Clinton has revealed why he cheated on his wife with Monica Lewinsky while he was in office.

Clinton speaking in a new documentary series, ‘Hillary’ set to air on March 6th said he cheated with Lewinsky because it helped to ‘manage his pressures and anxieties at the time in the White House.

The former President admitted that when he met Lewinsky, the pressure of the job was too much and he thought to himself ‘Here’s something that will take your mind off it for a while.’

Bill revealed that the pressure being a president at the time made him have an affair with Lewinsky.

He described the extra-marital affair as something that he used to take his mind “off work for a while.”

The scandal at that time led to Clinton being impeached in 1998 by the Reps.

However, he survived the trial in the Senate and remained in office during his second term.

Clinton apologised to Lewinsky, adding that he feels ‘terrible’ that the affair with him defined her life.

“You feel like you’re staggering around, you’ve been in a 15-round prize fight that was extended to 30 rounds and here’s something that will take your mind off it for a while, that’s what happens

“Everybody’s life has pressures and disappointments, terrors, fears of whatever

“Things I did to manage my anxieties for years. I’m a different, totally different person than I was, a lot of that stuff 20 years ago.

“I feel terrible about the fact that Monica Lewinsky’s life was defined by it, unfairly I think.

“I’ve watched her over the years trying to get a normal life back again but you’ve got to decide how to define normal,” Clinton added.