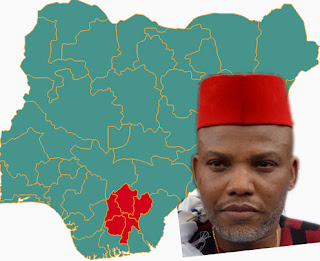 The Ohanaeze Youth Council on Saturday warned the Abia State Commissioner of Police, Mr Ene Okon, to ensure that his men stayed away from the burial of Nnamdi Kanu’s parents.

Eze Israel Okwu Kanu and Ugoeze Sally Kanu, parents of the leader of the proscribed Independent People of Biafra, will be buried on February 14, 2020


But ahead of the burial, the President of OYC, Igboayaka O. Igboayaka, stated that the Abia State CP had, in an interview with a national daily vowed to disrupt the burial of Kanu’s parents should the IPOB leader’s followers show up in Umuahia or anywhere near Afaraukwu, Kanu’s hometown.

Igboayaka cautioned that any move by the police to disrupt the burial or launch ‘Operation Elephant Dance’ would be resisted by his group.

A statement signed by the Special Assistant on Media and Publicity to the OYC President, read in parts, “In an interview he (Abia CP) granted a national daily, Sun Newspapers, he vowed to disrupt and scatter the venue of the burial ceremony if Kanu’s followers dare venture into Umuahia or anywhere around the Afaraukwu community.

“Okon added that the police under him would launch Elephant Dance should IPOB members refuse to heed to his dictates. We in OYC see this tough talk and boastful outburst from the police boss in Abia as reopening the wounds of the Nigeria-Biafra war, which was declared “no victor, no vanquished” by the then Nigerian military government.

“Okon’s deadly outburst at this point, if not dragging Nigeria back to the repeat of the 1966 crisis, is capable of causing chaos and anarchy in the country. As worrisome and shameful as this could be at this hour, we are compelled to advise Mr Okon that no reasonable security agency launches or deploys a crime fighting system where there is no crime.

“Any move to disrupt the burial or launch ‘Operation Elephant Dance’ by the Nigeria Police Force would be solely viewed as an act of conventional war against Ndigbo, and we must resist it with anything within our reach.”

Igboayaka, however, called on the President, Major General Muhammadu Buhari, to withdraw military troops and police personnel hovering around Afaraukwu community, so as to allow the bereaved to accord their last respect to the late father and mother of Nnamdi Kanu.