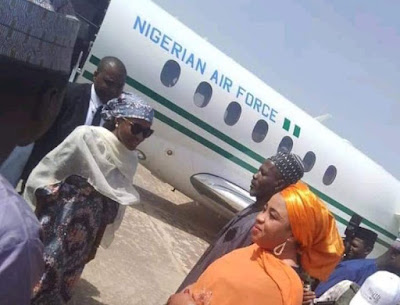 A Nigerian lawyer, Oluwatosin Ojaomo, has sued Hanan, one of President Muhammadu Buhari’s daughters, for illegal use of the presidential aircraft.

Ojaomo instituted the action at the High Court of the Federal Capital Territory (FCT), alleging that Hanan used the aircraft for her private assignment.

In the suit, filed on February 6, Ojaomo is asking the court to, among others, declare as unlawful Hanan’s alleged use of the aircraft for her private engagement in Buachi State on January 10, 2020.

In a statement of claim, the plaintiff is claiming that not being a public officer, the President’s daughter was not entitled to fly in any of the presidential aircraft at a cost to the state.

He said: “I know for a fact that the presidential fleet with the Nigerian Air Force (NAF) is not a property of the defendant (Hanan) or Major-General Muhammadu Buhari, the President and Commander-in-Chief of the Armed Forces of the Federal Republic of Nigeria, but rather, the property of the people of Nigeria, which is provided only for the President to perform his official functions, and nothing more.

“I know for a fact that a huge sum of money has been spent, from public purse, to offset the flight fuelling and other logistics to fly the aircraft to Bauchi State by the Federal Government of Nigeria.
“The defendant is bound to pay for the said cost to the Federal Government, since she has decided to commercialise one of the aircraft in the presidential fleet of the NAF for her private function.”

The lawyer is praying the court to, among others, declare that “the defendant has no statutory right to privatise the usage of the presidential aircraft, which is provided for the President of the Federal Republic of Nigeria and other public officers for official functions”.

The case is yet to be assigned for hearing.