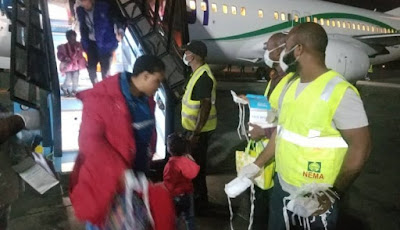 The National Emergency Management Agency (NEMA) has received another batch of 161 stranded Nigerians from Mtiga in Libya.

Farinloye said that the Nigerians arrived the Cargo Wing of the Murtala Muhammed International Airport, Lagos, late on Thursday night.

According to him, the returnees were brought via Al Buraq Air Boeing 737 aircraft with flight number UZ 189 and registration number 5A-DMG.

The News Agency of Nigeria (NAN) reports that other agencies that received the returnees included the Nigeria Immigration Service (NIS) and the National Agency for the Prohibition of Trafficking in Persons (NAPTIP).

One of the returnees, an indigene of Akure, Ondo State, who preferred anonymity, while narrating her ordeal, said she was 19 years when she left Nigeria.

The returnee said that she spent a year and three months before she decided to return to Nigeria.

She explained that she left Nigeria due to pressure on her when her mother had mental health problems and the father of her child abandoned them.

“I was left with the tasks of fending for my siblings, mother and my daughter.

“My mother’s relations and friends abandoned us. I was a tailoring apprentice after my husband left us.

“My mum was thrown out of the house because we could not afford to pay for rent,’’ she narrated.

According to her, feeding became a serious problem, my siblings could not continue schooling and they dropped out of school.

“No one was there for us. I had no alternative than to seek more opportunities outside when I was told that I could secure good jobs.

“It was unfortunate that the so-called good jobs were meant to destroy our future. Most of our ladies are located in connection job while a handful in “Arabu” works.

“Arabu work is like the job of a house maid which goes with unpleasant experience from torture to overworking into very late hours and waking up very early. The `connection job’ is like introducing ladies to prostitution.

“ The worst of it all was that all efforts to raise money became fruitless as militants or police could burst into our houses, robbed us of our belongings and went away with everything we had worked for over there,’’ she said.

According to her, trying to send something through a Nigerian, you have to part with the same amount you wish to send.

She explained that a Nigerian would collect cash and asked his relation in Nigeria to send half of the amount to the person that the money was meant for,” she said.

The returnee said: “I will never encourage anyone to embark on this type of perilous journey as it is just a waste of one’s life for the period spent on this type of journey. Though it was an experience but a very bad one.

“I need assistance to start my life. My mother is better health wise and she is hawking pure water now.

“I learnt IOM and other organisations are helping people like us.

“ I want to complete my fashion designing apprenticeship but need to source for a means of feeding while I am under apprenticeship.”