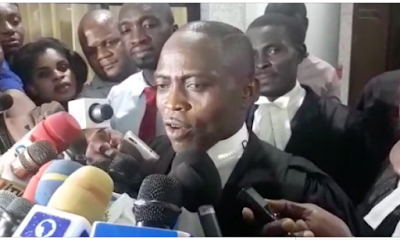 Abel Ozioko, counsel to Olisa Metuh, says he is ready to appeal the judgment of the federal high court in Abuja which sentenced his client to 39 years in prison.

Okon Abang, the trial judge, had convicted Metuh, a former spokesman of the Peoples Democratic Party (PDP), on seven counts of money laundering.

The judge held that all the years are to run concurrently, meaning Metuh would spend seven years in prison.

Describing it as “a bad judgment”, Ozioko said the judge used his client to “carry out an experiment.”

“We have our appeal in our hands, I still have confidence in the law courts and we are heading upstairs to the three wise men to know whether he is right or wrong,” he said.

Metuh, who was dressed in a navy blue “kaftan”, used crutches to aid his movement. Two of his sisters and other members of his family and friends were in court.

He didn’t look sober but smiled all through even when was being taken away in a green bus owned by the Nigerian Correctional Service, formerly known as Nigerian Prison Service.