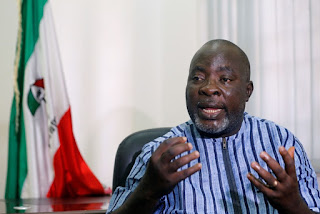 The Peoples Democratic Party on Thursday said it received the judgment of the Supreme Court, which nullified the election of the candidate of the All Progressives Congress, Mr David Lyon, and his running mate, Biobarakuma Degi-Eremienyo and declared the PDP candidate, Senator Douye Diri, and his running mate, Senator Lawrence Ewrujakpor, as the winners of the November 16, 2019 election.

The PDP National Publicity Secretary, Mr. Kola Ologbondiyan, in a statement, however, insisted that the apex court must, according to him, right the wrongs in the Imo State governorship election judgment which sacked its candidate, Chief Emeke Ihedioha and declared the APC candidate, Senator Hope Uzodinma, as the duly elected governor of the state.

Ologbondiyan said the Bayelsa judgment will not change the course of its demand that the Supreme Court rectifies the perceived manifest mistakes contained in its judgment on the Imo State governorship election.

According to him, the Supreme Court will be redeeming its image and restoring public confidence on its infallibility by reviewing the Imo verdict given the manifold unjustifiable mistakes contained in that judgment.

He congratulated the people of Bayelsa State, the governor-elect, Senator Douye Diri and his deputy governor-elect, Lawrence Ewrujakpor, as their mandate has been restored.