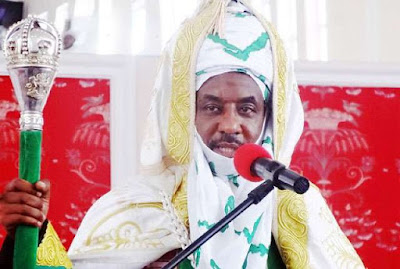 Former Governor of Central Bank of Nigeria (CBN) and Emir of Kano, HRH Lamido Sanusi, yesterday, advocated the enactment of laws by state governments, criminalising indiscriminate breeding of children, and leaving them to roam the streets begging for alms.

The royal father, who was apparently referring to the Almajiri system prevalent in most states in northern Nigeria, said rather than treating street children as criminals, their fathers should be arrested and prosecuted for the nuisance they have caused the society.

The former banker gave this opinion at the Joint National Conference of Nigerian Supreme Council for Islamic Affairs (NSCIA) and Future Assured Initiative on Repositioning the Muslim Family for National Development, held in Abuja yesterday.

He said that the states must enact laws to protect women and children being abandoned into penury by their “irresponsible husbands and fathers.”


Sanusi disclosed that he had, in conjunction with the Sultan of Sokoto, packaged some bills waiting to be presented to the Governor of Kano State, Alhaji Umar Ganduje, for onward transmission to the state House of Assembly to ensure justice for women and children.

He said traditional rulers and clerics and scholars have responsibilities to speak out against these injustices if the society must change for the better.

“Every day, wives are complaining about their husbands who claim their rights, but abandon their responsibilities of marriage; women being divorced with their husbands not taking care of the children and those children ending up on the streets, abandoned to drugs, political thuggery and violent extremism.

“We are hoping that we can stop treating Almajiri as criminals. When you see one on the street, ask him or her ‘where is your father?’ So, go and arrest the father, not the boy, because the father is responsible for the problem, not the child.

He recalled that in 1999, 12 states in the North adopted the Shariah without any reform of the laws outside of the Muslim Criminal law. He said that in these Shariah states, there are yet no laws addressing issues such as consent in marriage, the rights of wives and husbands, domestic violence, rights of women divorced, the responsibilities of husbands under divorce situations.

“If a child is found on the streets, it’s the father that is responsible and can the state hold him accountable? You cannot take that privilege and abandon the responsibilities,” he stressed.

Sultan of Sokoto, His Eminence, Sa’ad Abubakar, urged President Muhammadu Buhari to use his position to compel the state governors to ensure implementations of resolutions meant to address the challenge of out-of-school children, otherwise known as Almajiri, in the North.

“We are not short of recommendations and resolutions, what we lack is implementation. Give marching orders to the governors to implement resolutions reached, you have the big stick as the Commander-in-Chief, chiefly command well. Nobody will come and solve this problem for us. No matter how big a person, is he is not bigger than Nigeria,” Sultan said.

The Ooni of Ife, Oba Adeyeye Ogunwusi, who was also at the event, lamented that the Almajiri system had assumed a national embarrassment and required a holistic approach to bring it to an end in the country.

The traditional ruler said there was need to promulgate laws that will force fathers to be very responsible for their children.

“We can even link it to BVN. Today, everything is digitalised. We have to link children to those irresponsible fathers, producing children that are becoming menace to society. It’s time they take responsibility for their actions. If you cannot confiscate their assets, confiscate their bank accounts. Make life miserable for them; make life unpalatable for them so that they will be very serious about taking issue of birth control seriously,” Ooni said.

In his own remarks, President Buhari described religious leaders in the country as custodians of social values and advised them to give more attention to issues that strengthen the family, and build a better society.

“In this endeavour, our religious leaders and organizations are most important catalyst. They are the custodians of our values and of our social ideals. It is, therefore, commendable that the Nigerian Supreme Council, in collaboration with the Future Assured Initiative, has risen up to this challenge.

“I, however, wish to call on all our religious leaders and organisations, both Christian and Muslim, to follow suit by redirecting important elements of their preaching and teachings on family issues with a view to broadening the sensitization of people at the grassroots level,” he said.

The President said the government would also put more effort in ensuring economic support, and empowering of family members for more stability.

“We have been conscious of the havoc poverty is wreaking on the family. We, therefore, believe that poverty alleviation is central to safeguarding the integrity of our families.

“Our administration introduced a number of economic empowerment and poverty alleviation schemes. Some of these directly impact on families while others have an indirect effect on families through their multiplier effects,” he said.

First Lady, Mrs. Aisha Buhari, said her pet project will identify critical marriage challenges and suggest relevant instruments for addressing them, which include sensitizing relevant stakeholders on their responsibilities.

“We have succeeded in assembling an array of Islamic scholars to further deliberate on these matters, with the belief that they will do justice to the issues,” she said.