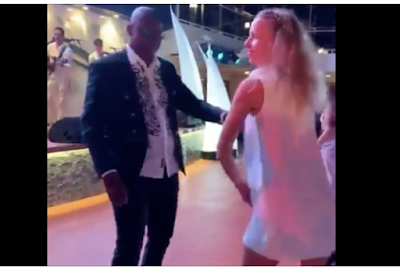 For Ayodele Fayose, former Ekiti State Governor, there is no better time than this New Year, forgetting his 2019 headache and dancing himself out in a party with a white lady abroad.

Fayose, who is facing trial over alleged N6.9 billion fraud and money laundering, was granted bail to travel abroad for medical treatment in July 2019 by the Federal High Court in Lagos.

But here is ailing Fayose dancing ‘salsa'( a dance routine that has it roots from Cuba) with a sexy foreign woman at an expensive new year eve party in a ship. Fayose was caught in the video having the best of fun and dancing with his white partner to a Latin American music.

The former governor was in suit as the sexy woman took control on the dance floor, holding Fayose’s hands and would intermittently twirl him round.

The video has set social media on fire.


Lauretta Onochie had posted the video on her twitter handle, commenting in a sarcastic manner: “It’s a miracle! Peter is healed! Praise The Lord! Doctors can work wonders sha. Ayodele Fayose On Medical Dancing therapy. This means he’s no longer in severe pain and we won’t be seeing him on stretchers during his next court appearance or on his way to jail. Thank you Doctors.”

Fayose had replied Onochie thus: “These “hailers”,when I was on their case, they were crying. Now I’m on my own lane enjoying my life, they are still crying & sucking. Expect more so you can cry more. I’m on medical check up not admission. Celebrating New Year is my right, haters can hug transformer. Happy New Year.”