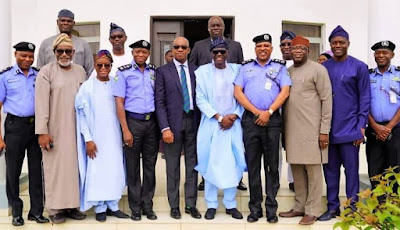 Recall it was earlier reported that the stage was set for the launch of the outfit by the six governors of the region.

Fayemi, who made this known in his New Year message, said the outfit would complement the efforts of the regular security agencies.


He said: “On January 9, 2020, the Western Nigeria Security Network known as Amotekun shall commence operations in all the six states in our zone

“Ekiti is very active in this initiative which will go a long way in securing the people and protecting the state.

“The fact remains, however, that criminality cannot be totally eradicated even as we are working meticulously at reducing it to the barest minimum in Ekiti State, and the evidence is there for all to see and acknowledge that we are making steady progress.

“Since we are not an Island, we are working with neigbouring states to strengthen our security architecture.”

The governor urged community leaders and groups not to allow themselves to be used to cause unnecessary tension that could trigger crisis.

He said: “I have personally kept a close watch on the security situation within and around Ekiti State, and I can assure you that as a government, we are leaving no stone unturned to ensure safety of lives and property in our dear state.

“Ekiti remains one of the safest places to live, work and conduct business in Nigeria. Henceforth, I urge our community leaders or groups not to allow themselves to be used to spread fake or unsubstantiated news with a view to setting the residents against themselves or destabilising the peace of the state

“We must encourage our people to report any strange signal or incident, but we must resist the temptation to resort to self-help at any time.”

He assured residents that the state will witness rapid improvement on its infrastructure in the New Year with a view to accelerating the economic recovery.

Dr. Fayemi said his administration is making steady, visible and sustainable progress in all areas as the state is now moving “from potentials to actualisation”.

Reiterating the resolve of his government to make life more meaningful and comfortable, he said that he would flag off the construction of four major roads that are critical to the industrial and agricultural development of the state by the middle of the month.

The new road projects are in addition to the on-gong work on the 7.2km new Ado-Iyin road, repairs in Ado township and commencement of the Ado Ekiti ring road, the Ado Ekiti Agro-Airport and repairs of other critical arteries in the state.

Fayemi said the 2020 budget of deliverables is “eloquent testimonies” to his administration’s deliberate and honest quest at providing good road network and improving the enabling environment for business concers in Ekiti State.

The governor said: “As a government, we are stepping up our efforts to bridge the huge infrastructural gaps to facilitate industrial development in Ekiti State. As of today, most of the economically viable but hitherto abandoned projects are being brought back to life. I am equally assuring you that all the ongoing and new projects for 2020 will receive adequate attention to ensure delivery within the stipulated time.

“On Monday, January 13, 2020, I shall flag off four major roads that are critical to industrial + agricultural development – Oye-Ikun-Otun, Aramoko-Erinjiyan – Ikogosi, Agbado – Isinbode-Omuo and Ilupeju-Ire-Igbemo roads. This is in addition to the on-gong work on the Ado New Iyin Road, repairs in Ado township and commencement of the Ado Ekiti Ring Road, the Ado Ekiti Agro-Airport and repairs of other critical arteries in the state.”

On the vision of his government to grow agribusiness, open farm to market access roads, the governor said the state government with the support of the World Bank-assisted RAAMP initiative would, embark on the construction of 1,000 km of rural roads to aid and enhance agribusiness in the State.

He said the government plans to explore the untapped natural resources and maximize the potential through the promotion and sustenance of agribusiness and solid mineral development as the mainstay of our economy.

He added that the administration is on course to lifting Ekiti people out of poverty to the path of prosperity by empowering farmers and entrepreneurs in the agriculture and solid minerals value chain.

Fayemi said: “Already, Promasidor Nigeria Limited has effectively taken over Ikun Dairy Farm to enhance the maximization of its full potential in a public private partnership.

“We have also restructured and expanded our rice and cassava programmes through partnership with key private sector players like Dangote Farms, Jumlar Rice Limited and Stallion Rice who are all setting up rice mills in the state in 2020 and a number of cassava mills are also coming up – Promise Point, FMS Farms and Krest Farms are pioneers here.

“More brownfield and greenfield investments in agribusiness are being planned in palm oil and cocoa sector, and we are sure they will manifest in year 2020.”

Reviewing the efforts of his administration in 2019, the governor said his government doubled efforts at redefining good governance by restructuring, strengthening and empowering the public service to function more effectively.

He added that the injection of 3,000 new workers into the public service was not because the income of the State had increased but to ensure efficiency in service delivery.

His words: “The year 2019 was definitely better than the previous year for our public servants. Their salaries were regular and they could plan their lives in a more productive manner.

“Over 1000 retired public servants collected their gratuity both in the State and Local Government Service in 2019 as we increased monthly gratuity to N100 million from N10 million in the previous administration.

“Our ultimate aim is to ensure that all retirees receive their gratuity shortly after retirement. We started paying the new minimum wage in October 2019 and I promise Ekiti kete that this will extend to all categories of workers beyond grade level 6 as soon as the current negotiation on consequential adjustment is completed.”