Reasons Igbo people should not be talking of presidency now – Sen. Abaribe 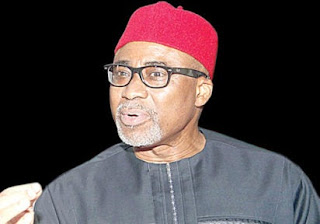 The Senate Minority Leader, Eyinnaya Abaribe, has pointed out reasons why the South East should not be talking about 2023 presidency now.

Abaribe stated that the South East should be talking about teaming up with others to make Nigeria a better place and not 2023 presidency.

The Abia South Senator in a chat with newsmen also lamented that the structure of the country was very bad, hence the need to jettison calls for presidency.

He said: “I think what you are doing now is that you are also creating this same thing that we are decrying. We are saying that it is too early for anybody to be talking about who will take whatever and the times are very dire. And instead of looking at that you are asking other questions.

“OK, an Igbo becoming the next President, if it doesn’t change your life today, in what way will that help you? So, what we are interested in is how do we get this country to be better and I have made this point repeatedly before and let me repeat it: the structure of the country should be changed before we start thinking about who gets what and I believe and I stay on that.

“The structure is so bad that it is very difficult for you to make the country work. That’s the point. At the moment, the country has turned into a unitary government and we merely mouth federalism.

“And so, it makes it near impossible for you to even do mere security. A local government chairman can’t even secure his environment and he’s called the chief security officer of his local government. He can’t call a DPO to say ‘how do we secure our area?”