Many stranded as Boko Haram attacks communities on Damaturu-Maiduguri road 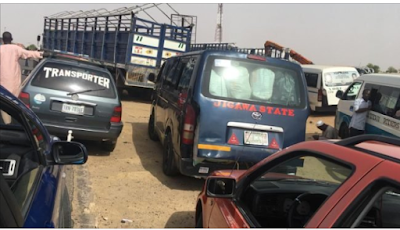 Many people have been stranded since Sunday when suspected Boko Haram insurgents launched attacks on communities along Damaturu-Maiduguri road.

Damaturu is Yobe state capital, and Maiduguri, Borno state capital. The distance between both towns is about 130 kilometres, and there are a number of villages along the axis.

A Maiduguri resident who had gone to Damaturu said on Monday that the road had been shut since Sunday morning and that many people have been unable to return to their stations.

“We were supposed to return to Maiduguri but we’ve been stranded here in Damaturu, because no vehicle is allowed to use that road now,” the source said.


“In fact, the time we left Maiduguri for Damaturu, we could feel the presence of the insurgents as we heard that some motorists have been earlier attacked. Although the military has marched into this area, we believe hundreds of the insurgents are still within the bushy villages along this axis, hiding.”

Another source in Damaturu said transport workers in the areas affected have moved their vehicles from the park for fear of attacks.

“The insurgents have been launching fresh attacks these days, and we are worried,” he said.

“Within the town, we are careful of how and where we move to. It appears as if the insurgents have infiltrated the major towns.”

There was also an exchange of fire on Monday between the army and the insurgents in Jakana village in Konduga local government area of Borno state. Jakana is one of the communities along Damaturu-Maiduguri axis.

Sagir Musa, army’s spokesperson, was not available to comment on the matter.

Soldiers deployed in the area, however, said things would be brought under control.

“The troops are pushing them off to the bush, and hopefully the road should be reopened later today,” one of the soldiers said.

On Thursday, the insurgents attacked Michika, a town in Adamawa state.

On Christmas eve, a faction of Boko Haram affiliated to the Islamic State, also killed 11 Christian captives in Borno, saying the action was taken to avenge the deaths of Abu Bakr al-Baghdadi, IS’ late leader and Abul-Hasan Al-Muhajir, its spokesman, who were killed in Syria in October.