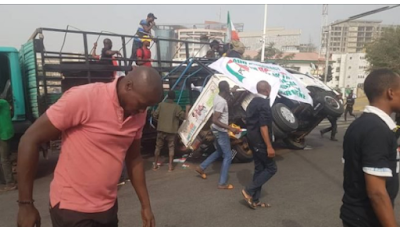 Some supporters of the Peoples Democratic Party (PDP) were injured on Monday when a truck conveying them during a protest in Abuja fell.

The PDP supporters were heading to the Supreme Court Complex located in Central Area when the accident occurred.

Not long after members of the party  left their campaign headquarters in Maitama, the truck, said to be carrying about 30 persons, attempted to forcefully make a u-turn at Transcorp Hilton junction but fell to its side.

It took the intervention of other protesters to rescue those trapped in the truck.

The party embarked on the protest to kick against a supreme court judgement sacking one of their own.

Last Tuesday, the apex court nullified the election of Emeka Ihedioha as the governor of Imo state.

It held that Hope Uzodinma of the All Progressives Congress (APC) was the winner of the March 9 governorship election in the state.

But the PDP rejected the judgement and accused the court of ruling against the wish of the people of Imo.