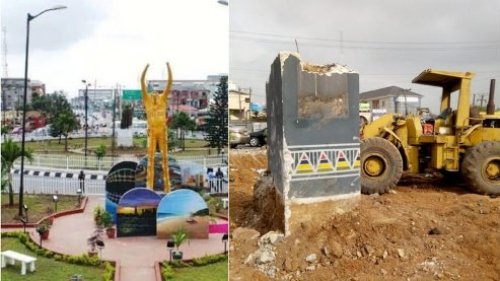 The Lagos State Government has pulled down the statue of the late Afrobeat legend, Fela Anikulapo-Kuti, at Allen Roundabout in Ikeja, Lagos.

Former Lagos State Governor, Mr Akinwunmi Ambode, had on October 15, 2017, unveiled the Liberation Statue in honour of Fela as part of activities marking his 79th posthumous birthday and the 20th anniversary of his demise.

But in a bid to rid the Allen Roundabout of traffic gridlock, the statue was pulled down, says officials of the LASG.


In a statement by Gboyega Akosile, the Chief Press Secretary to Governor Babajide Sanwo-Olu, the Allen Roundabout, housing the Fela’s statue is one of the major causes of traffic gridlock being experienced by motorists.

The statement read in part, “The State government has embarked on the removal of some roundabouts identified as the major causes of traffic gridlock being experienced by motorists.

“Four roundabouts including Ikotun, 2nd roundabout on the Lekki-Epe Expressway, Allen Avenue roundabout and Maryland will be removed to pave the for road expansion and free flow of traffic.

“The government, through the Ministry of Transportation, says the removal of some roundabouts and street furniture such as giant billboards will give room for road expansion and strategically ease off traffic congestion in some parts of the metropolis.”

The Special Adviser to Governor Sanwo-Olu on New Media, Jubril Gawat, in a tweet on Tuesday, added the renovation of the Allen roundabout would end the chaos witnessed during turning in the area.