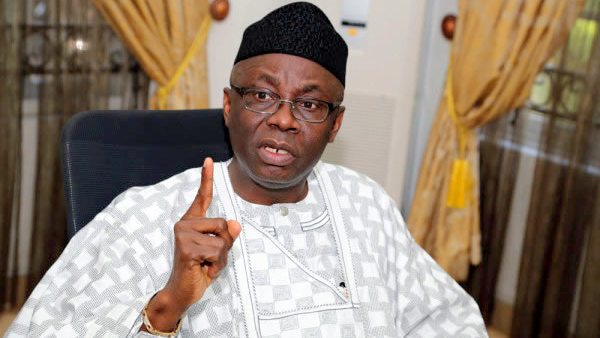 The Serving Overseer, Citadel Global Community Church, formerly known as Latter Rain Assembly, Pastor Tunde Bakare, has urged the President Muhammadu Buhari not to leave the choice of his successor in 2023 to chance.

In a nationwide live broadcast in his church on Sunday, Bakare, who paid Buhari a visit last week, said it was important for Mr president to influence who would emerge his successor in 2023 so that his legacies would not be rubbished.


Buhari had last year declared that he had no intention of grooming anyone to succeed him in office.

“Succession is very funny because if I did find anybody, I will create more problems for him or her. Let those who want to be President try as much as I did,” Buhari had said last July.

But Bakare, who had declared his intention to be Nigeria’s 16th President after Buhari, who is number 15, said there was a risk that a looter might take over if Buhari did not deliberately plan and determine who his successor would be.

Bakare said, “God is into succession. Anyone in government that does not concern himself about succession is destroying his own legacy because the person coming after you can just mess up everything.

“Let us ask God for grace of accurate succession; that he (Buhari) will not hand over the baton of government and governance to thieves and perverts, to corrupt and power-drunk individuals, but those who are true patriots, who will serve like our founding fathers served; though not perfect, they did their best.”

Bakare said by institutionalising a system of succession, Buhari would join the league of strong world leaders like the late Deng Xiaoping of China; the late Nelson Mandela of South Africa and Goh Chok Tong of Singapore.

He said, “As the government of President Muhammadu Buhari ushers us into the second decade of the 21st century, the third pivotal objective of governance should be to build a strong post-Buhari legacy facilitated by accurate succession.

“In this regard, Nigeria must learn from some of the best succession examples in recent history. Of note is the legacy of Deng Xiaoping, a second-generation Chinese leader who laid the foundation for today’s China. Xiaoping flagged off the ‘Four Modernisations’ programme, which searched around the country for leaders who, in his words, were ‘revolutionary, younger, more knowledgeable, and more specialised.’

“In three decades, that programme gave China a succession of leaders who piloted China’s economic transformation, including the current President, Xi Jinping. Without their foresight, we would not be running to China today to finance our shortsightedness.

“We must also learn from Nelson Mandela who stepped aside after one term, but not without positioning the likes of Thabo Mbeki and Cyril Ramaphosa. We must learn from the success story of Singapore, whose former Prime Minister, Goh Chok Tong, once said, ‘Mr Lee Kuan Yew has always emphasised political succession, and when I took over, likewise, I planned for succession…Prime Minister Lee is also working very hard to plan for succession.’

“Therefore, even as we build institutions of democratic governance, a key responsibility that history has bestowed on President Muhammadu Buhari at this turning point in our journey to nationhood is to institutionalise systems of accurate succession that will build and sustain the Nigeria we desire. This is a task that must be done.”

In the address titled, “Unveiling the true enemies of Nigeria,” Bakare condemned attempt by the legislature to clamp down on social media critics, saying, “I will not support the suppression of the most potent tool for citizen engagement in the 21st century through a misguided Social Media Bill.”

He identified the enemies of the nation as “the political puppeteers who rig the system to enthrone their stooges and use them to corner resources and opportunities.

“They are the political bandits and pseudo-democrats who are maniacal in merchandising the will of the people, from masterminding vote-buying to engineering seemingly spontaneous outbreaks of political violence. These are the true enemies of Nigeria.”