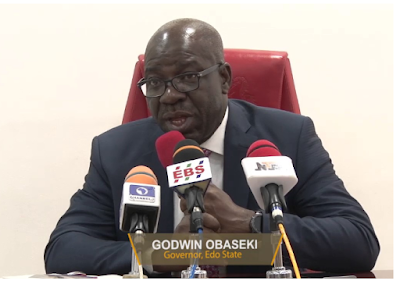 Governor Godwin Obaseki of Edo State, has threatened to expel Adams Oshiomhole, National Chairman of the All Progressives Congress, APC.

Obaseki warned that Oshiomhole would be expelled if he continues to “disrupt activities” in the state and the state arm of the party.

The governor issued the threat during a meeting with the APC local government Chairmen in the state yesterday in Benin, where he also directed the party chairmen to seriously deal with any persons or group carrying out activities outside what the party hierarchy states.

According to Obaseki: “All this nonsense they are doing, if anybody in the name of our party tries to do anything contrary to what we have agreed as a party we will deal with that person ruthlessly no matter who he is.

“We are warning the suspended National Chairman. If he continues his activities in Edo State, I will show him that I am the Governor of Edo State. Why he was Governor, he will not tolerate a fraction of the misdemeanor and misbehaviour he is undertaking today.

“I have declared that if Oshiomhole comes here to Edo to say he wants to disrupt the activities of the state and the party we will deal with him the way we know how best to do it. Comrade Oshiomhole stands suspended from the party. In due course, we will expel him if he does not behave. The party does not belong to him, it belongs to all of us.