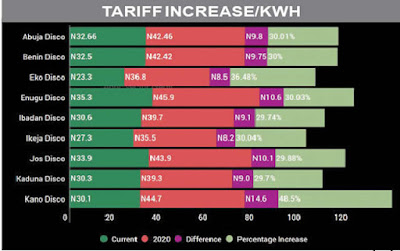 Organised labour, industrialists and civil rights groups on Sunday condemned the hike in electricity tariffs by the Federal Government.

Labour, in an interview with newsmen, described the electricity tariff hike as a daylight robbery considering the epileptic power supply in the country.

The Lagos Chamber of Commerce and Industry, on its part,  berated the  Federal Government for increasing the tariffs and doing nothing about estimated billing by distribution companies.

While MAN, Rivers/Bayelsa states branch, described the increase in electricity tariffs as insensitive to the economic realities in the country, the Kaduna State Chamber of Commerce, Industry, Mines and Agriculture said it was counter-productive.


They said the electricity distribution companies were collecting money for the services they were not providing.

The Nigerian Electricity Regulatory Commission had on Saturday directed the 11 electricity distribution companies in the country to increase their tariffs beginning from April.

An analysis of the latest NERC directive shows that the Federal Government’s agency has actually increased tariffs payable by all the major classes of power consumers.

One of our correspondents observed that tariffs for the three major categories of consumers in Ikeja, Ibadan, Kano and Port Harcourt distribution companies were jerked up.

Residential customers in the R3 category under Ikeja Disco, who currently pay N26.5/kWh, will start paying N36.49/kWh beginning from April, indicating an increase of N9.99.

Commercial customers in the C3 category under this Disco, who currently pay N24.63/kWh, will start paying N38.41/kWh, representing a hike of N13.78.

Industrial customers in the D3 category served by Ikeja Disco, who pay N25.82/kWh currently, will start paying N38.85/kWh, representing an increase of N13.03.

Going by the latest order of NERC, it, therefore, implies that power tariffs in Nigeria have increased by over threefold in the last five years.

On August 28, 2019,  it was reported that electricity tariffs grew threefold in four years. According to the report,  the rates increased by more than 300 per cent during the period.

The report stated that between 2015 and 2019, the average electricity tariff climbed from N12 kWh to about N32kWh.

Berating  the government, National Chairperson of the Joint National Public Service Negotiating Council (Trade Union Side), Abdulrafiu Adeniji, in an  interview with one of our correspondents, said the FG rushed to increase electricity tariffs when the new minimum wage had not been fully implemented throughout the country.

No fewer than 15 states had yet to conclude negotiations on the new minimum wage, despite the December 31   deadline the organised labour  gave governors to sign agreements with their workers.

Commenting on the increase in electricity tariffs,  Adeniji said, “If the new tariff policy is eventually implemented throughout Nigeria, it is not only targeted at labour, it is a daylight  robbery of all Nigerians.

“We are all aware how epileptic the electricity supply is in the country.  We have yet to get value for the money Nigerians pay on the  electricity bill. Why increasing the tariffs when the supply is not stable and consistent? Government  does things  before thinking of their implications, otherwise, there is no basis for the increase in electricity tariffs for now.

“If you give us the minimum wage that has yet to be implemented across board and you are increasing electricity tariff that will be implement across Nigeria, irrespective of the poor supply, this is an unexpected added burden on Nigerians.”