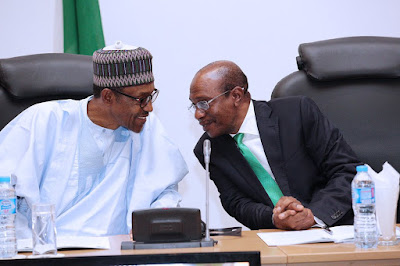 Though the Central Bank of Nigeria (CBN) has said Nigerians should not panic over the gradual decline in the foreign reserves, observers have cautioned both the fiscal and monetary authorities not sleep with their eyes closed because it might spell doom for the country.

This is because if the depletion of the reserves continues with the steady fall, the nation, which is Africa’s largest economy, may fall into another recession under the administration of President Muhammadu Buhari.

During his first term in office as a civilian leader of the country, just after a year he was sworn into office in 2015, Nigeria went into an economic recession. However, a year later, 2017, Mr Buhari and his team led the nation out of the crisis.

One of the main reasons for sliding into recession was a decline in the price of crude oil at the global market coupled with decline in the volume of the commodity produced.


The period was when restive Niger-Delta youth were attacking oil facilities in the oil-rich region, making it difficult for Nigeria to meet its daily production, resulting into lesser revenue from the sale of crude oil, the country’s main source of foreign earnings.

But when federal government held meetings with stakeholders from that part of the country, the attacks reduced and Nigeria started producing up to 1.7 million barrels per day, resulting into more money.

In 2019, the average price of crude oil at the international market was around $59 per barrel, while the benchmark for the country’s budget was $55 per barrel. This year, the benchmark was put at $60 and the price has remained around $63 to $65.

But despite the excess recorded from the sale of crude oil last year, the external reserves have been reducing, making some observers to raise concerns, urging the central bank to do something fast to prevent a devaluation of the Naira, which the present government does not support.

Recall that the apex bank has been taking from the reserves to support the local currency, making it stable around N360 per Dollar at most of the various segments of the foreign exchange market.

For example, at the beginning of a new week, the CBN regularly releases the sum of $210 million to the forex market, with wholesale sector normally getting $100 million, the Small and Medium Enterprises (SMEs) and the invisible segments receiving $55 million each. At the end of the week, it also injects over $200 million into the Retail Secondary Market Intervention Sales (SMIS).

These interventions have contributed to the decline in the country’s reserves and the central bank has promised not to stop defending the Naira so as to avert currency speculations, which pushed the local currency exchange rate to over N500 to a Dollar over three years ago.

According to data obtained from CBN, Nigeria’s external reserves have dropped about $306.1 million since the beginning of this year to $38.3 billion as at Friday, January 10, 2020.

In November 2019, the Governor of the CBN, Mr Godwin Emefiele, told some potential investors in London, United Kingdom, that the devaluation of Naira would only be possible if the nation’s external reserve seems go below $30 billion and the international price of crude oil drops to $45 we barrel.

In 2017, President of Association of Bureau de Change Operators of Nigeria (ABCON), Mr Aminu Gwadabe, said Mr Emefiele assured his members that the bank had no intention to devalue the Naira.

But Africa’s richest man, Mr Aliko Dangote, is already planning ahead of a possibly devaluation has ten Nigerian Naira by the CBN.

He recently told Mr David Rubenstein of Bloomberg TV that in order not to be caught off guard, he was considering getting an office space in New York, United States of America, to protect the wealth of the family, expressing concerns that a devaluation of the currency may weaken his local investments.

“In Africa, you know we have issues of devaluation, so we want to really preserve some of the family’s wealth,” Mr Dangote, 62, was quoted as saying on the David Rubenstein programme, noting that the office space in New York will help to diversify his business and avoid the risk of currency fluctuations on his home continent.